[I] advise you to proceed with the polical organization of the country up to this point.” McClellan to Pierpont, Huttonsville, July 14, 1861.

One hundred and fifty years ago this spring, the citizens of western Virginia found themselves at a crossroads. On April 17, 1861, their Richmond-based leaders passed an ordinance declaring that Virginia would leave the United States in order to join a newly formed nation -- the Confederate States of America. Though state law required that this ordinance be ratified by a popular vote before implementation (scheduled for May 23), Virginia’s leaders demonstrated that gaining public approval was just a formality by embarking immediately on military action against the United States of America. On April 18, the state militia seized both the Norfolk Naval Yards and the federal arsenal at Harpers Ferry, and in the days that followed, efforts began to seize and secure strategic points across Virginia.

To most Virginians living west of the Alleghenies, secession from and overt military action against the United States, before the people had even spoken, was nothing short of traitorous despotism. Western Virginians had, in fact, been at odds with their government over issues ranging from taxation and representation to education for decades. But this latest act, engineered by eastern gentry whose fortunes were tied to the slavery-based economy of the Southern plantations, was beyond the pale.

Alarmed by the haste of Virginia’s military action, western Virginians realized that any attempt to thwart their government’s intentions must be immediate. Small scale meetings to explore options began on the very day the Secession Ordinance was passed. On April 22, 1861, just five days after passage, a crowd of more than 1,000 western Virginians loyal to the United States assembled at Clarksburg on just two days’ notice. Known today as the Clarksburg Convention, this meeting resulted in the drafting of a resolution condemning the state government’s actions, and the development of a plan to convene a more formal assembly in Wheeling at which representatives of all northwestern Virginia counties would be present in three weeks’ time.

On May 13, 1861 delegates from twenty-seven northwestern Virginia counties gathered to plot the future of their region in what became known as the First Wheeling Convention. The debate focused almost immediately on the creation of a new state. While there was much consensus for such action, it was eventually agreed that concrete steps towards that end would be premature until Virginia’s secession had been assured through ratification by popular vote.

A more urgent matter, it was agreed, was securing western Virginia from imminent seizure by forces loyal to the Confederacy. The convention concluded with the plan of seeking immediate military assistance from Washington upon ratification of the Secession Ordinance, and for the delegates to meet once again in Wheeling in June.

During the Second Wheeling Convention which began on June 11, Francis H. Pierpont emerged as one of the principal advocates of immediately forming a loyal or “reorganized” government of Virginia in order to provide for the protection of loyal Virginians everywhere while the deliberations over statehood continued. As the Richmond government had abdicated its charge by joining a foreign nation, Pierpont held, it stood to reason that a new governing structure for Virginia, U.S.A. was needed regardless of whether or not a new state was created. Moreover, Pierpont maintained, the creation of a loyal Virginia government was essential to the statehood movement as it would be unconstitutional for a new state to be carved out of an existing state without the existing state’s approval.

Recognizing the wisdom of this position along with the urgency of creating a governing authority to take command in the current crisis, on June 19, 1861, the Second Wheeling Convention adopted an “Ordinance for the Reorganization of the State Government.” On the following day, Francis H. Pierpont was unanimously elected governor.

The course of Pierpont’s actions at the helm of the Reorganized Government of Virginia, including his critical role in creating West Virginia, are documented in detail by the West Virginia Collection’s voluminous Francis H. Pierpont Collection. Including political papers, correspondence, speeches, essays, news clippings, and scrapbooks, the collection contains more than 800 telegrams dating from the period during which the loyal government of Virginia was based in Wheeling (1861-1863). The messages comprise nearly a daily record of the governor’s efforts to preserve Union rule in western Virginia over the next two years.

The West Virginia and Regional History Center is pleased to announce that the complete Francis H. Pierpont Civil War Telegram Series will be made available online for the first time in a new digital collection to be debuted by the WVU Libraries on June 20, 2011, the 150th anniversary of Pierpont’s election as Governor of Virginia.

The Pierpont Telegram Series consists mostly of telegrams received by Pierpont between June 1861 and May 1863. The vast majority of communications concern military matters. Many messages regard the raising and outfitting of troops, and the appointment of officers. In a communication of June 27, 1861, one week after Pierpont was elected but before he actually assumed control (the Reorganization Ordinance did not go into effect until July 1), he received a communication from Major General George B. McClellan, commander of the Union Army’s Department of the Ohio, outlining his responsibility in the latter regard:

His Excy. FH Pierpoint Wheeling June 27 1861. By Telegraph, from Grafton June 27 1861. Since I recognize you as the Governor of Virginia it devolves on you to appoint officers for the Regiments mustered into the US Service. The second & third Regiments are nearly formed & appointments required I suggest that elections of men be respected for company officers & that the best men you can find be selected for the field officers. The order of the president for three years volunteers does not recognize right of election, but leaves appointments of officers with Governor of the state. General officers are appointed by the president. G. B. McClellan, Maj Genl

Pierpont would receive a great many telegrams in the ensuing weeks and months regarding the need for appointments of high ranking officers including communications from both soldiers and private citizens recommending for or against particular candidates.

Another important function of the governor was that of outfitting the troops under his command. This included not only securing and distributing arms, uniforms and other supplies, but also finding the funds to acquire such provisions. Several telegrams suggest that loyal Virginia troops were poorly armed and ill equipped. On October 3, 1861, Brigadier General Benjamin F. Kelley wrote from atop Big Sewall Mountain that he had urgent need for blankets and a cannon. “It is impossible to render competent service to the country unless provided with the means to do it,” Kelley noted.

Several weeks later, Colonel Henry Anisansel of the First (West) Virginia Cavalry complained, “What does it mean, I have rec’d … three hundred revolvers, four inches, playthings for children … such weapons were not intended for a regiment….”

A great many telegrams report on the progress of the war and the constant struggle for control of western Virginia. On July 14, 1861 General McClellan wired that his forces had pushed the Confederates beyond the Cheat River and that they had retreated to Staunton. “I advise you,” McClellan wrote, “to proceed with political organization of the country up to this point.”

A week later, however, Pierpont was notified that a force of one thousand secessionist troops had arrived in Marion County. To respond to this emergency, on July 21, Colonel David T. Hewes, Third Virginia (Union) Regiment wrote to Pierpont’s attorney general, James S. Wheat, with the suggestion that Colonel Cyrus Vance of Clarksburg, “a gentleman in every way qualified,” be appointed to raise a regiment immediately to respond to the threat in North-Central (West) Virginia. Such communications would take place on nearly a daily basis for the next two years.

As might be expected, Governor Pierpont received many telegrams during Confederate General Albert Gallatin Jenkins’ raid throughout the heart of (West) Virginia during the summer of 1862. On September 4, Colonel J.A.J. Lightburn reported that Colonel J. C. Rathbone had surrendered extensive troops under his command along with the town of Spencer to Jenkins. (Rathbone was later “dismissed” from service as a consequence of giving up without a fight.) The following day, Lieutenant Colonel Daniel Frost reported that Jenkins had crossed into Ohio. On September 8, Frost wrote that the Confederate General was “reported at his farm,” (Greenbottom) in Mason County. A wire of September 10 informed the governor that Frost and a Union force of 750 had driven Jenkins across the Kanawha and into Cabell County where Colonel John C. Paxton “attacked & routed him … handsomely.”

Several telegrams contain reports of citizens suspected of disloyalty or aiding and abetting the Confederacy. Likely one of the most startling communications Pierpont received was one informing him that Judge Lewis Wetzel, editor of the Point Pleasant Register, had been “shot dead” by John Hall, one of the most prominent of the Wheeling Convention members. “The difficulty arose from an article that appeared in this morning's paper,” the telegram’s author noted.

The Pierpont telegrams include a number of significant communications from Washington. One of the earliest and most noteworthy is a wire from U.S. Senate leader Sen. Benjamin Franklin Wade indicating the Senate’s recognition of the legitimacy of both the Pierpont government and its representatives. Wade wrote on July 7, 1861, “Your senators shall be admitted to their seats whenever they appear whether the old ones are vacated or not but I intend to have them vacated tomorrow.”

There are five telegrams from President Lincoln in the series, including the chief executive’s oft-cited advice to Pierpont in regard to the creation of the new state of West Virginia. Quoting a Latin adage (festina lente) meaning “with deliberate speed,” Lincoln instructed the governor to “Make haste slowly.”

Whereas all but one of the Pierpont Civil War Telegram Series date from the period in which the Reorganized Government of Virginia was based in Wheeling, the single exception is a notable one. On April 9, 1865, by which point Pierpont’s government was established in Richmond, the governor received the following message from Lincoln’s Secretary of War, Edwin M. Stanton:

This Department has just recd official report of the surrender – this day of Genl Lee & his army to Lt. Genl Grant on the terms proposed by Genl Grant. Details will be given as speedily as possible Edwin M. Stanton Secy of War

Stanton appended his message with a series of telegrams exchanged by Grant and Lee earlier that day in which the opposing generals reviewed the terms of Lee’s surrender of the Army of Northern Virginia, CSA, which would soon bring the Civil War to an end. This fascinating exchange – the precise and cordial words of the two leaders, telegraphed to each other at the moment of surrender – will be available for all to see and read when the West Virginia and Regional History Center’s Pierpont Civil War Telegrams Series website makes its debut on West Virginia Day, June 20, 2011. 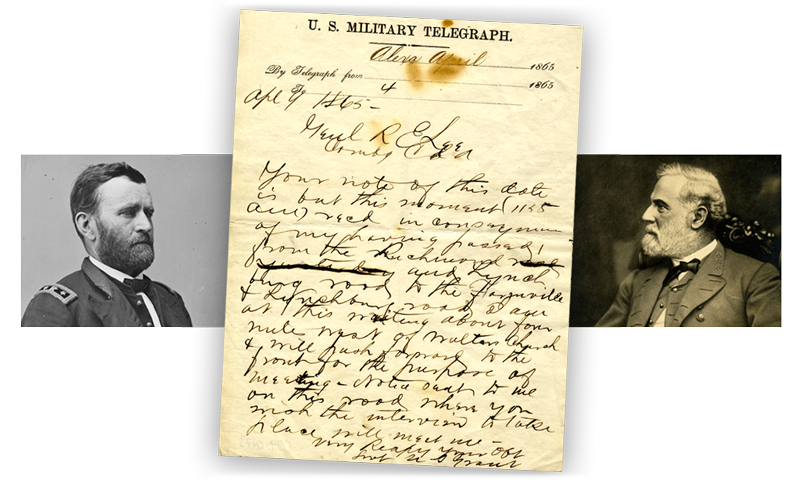 Grant to Lee, April 9, 1865: Your note of this date is but this moment (11:55 am) rec’d.... Read the rest of this several page exchange between the two generals on the West Virginia and Regional History Center’s Francis H. Pierpont Civil War Telegram Series website debuting on June 20, 2011.